A revolutionary new medication is giving hope to thousands of patients who are living with a debilitating muscle wasting disease.

People with Spinal Muscular Atrophy (SMA) have until recently been without any suitable medication for the condition, which leaves many sufferers unable to walk and needing to use an electric wheelchair.

But now, thanks to advancements in modern medicine, there are two drugs licensed for use by this group of patients; one is an oral medication called Risdiplam and the other (Nusinersen) is administered by spinal injection called a lumbar puncture.

The Muscle Disease Unit at the Manchester Centre for Clinical Neurosciences at Salford Royal was set up in 2020 to improve the care for people living with muscle wasting conditions and is the main treatment centre for people with SMA in the North West of England.

The team includes neurologists, a specialist nurse and care advisor, and a physiotherapist and is at the forefront of delivering novel treatments for muscle wasting conditions, including SMA. There are ongoing research projects at the centre contributing new findings to help find cures for these disabling conditions.

Sam Turner, who has SMA, has been in an electric wheelchair since he was two years old, after his parents noticed that at 18 months old, he wasn’t developing like other children his age.

“I just wasn’t reaching all the milestones they would have expected me to,” said Sam, who is now 21 and lives in Denton, Manchester.

“My parents held events to raise money so they could buy me my first wheelchair so I could get around independently.

“I used to go and watch my younger brother at football and the coach would try to get me involved but I just couldn’t do what they were all doing.”

It was during a hospital stay when he was 10 years old that Sam got talking to another patient with SMA who played powerchair football that he decided to give it a go and has been playing ever since. He now plays for Sale United Powerchair Football Club team. 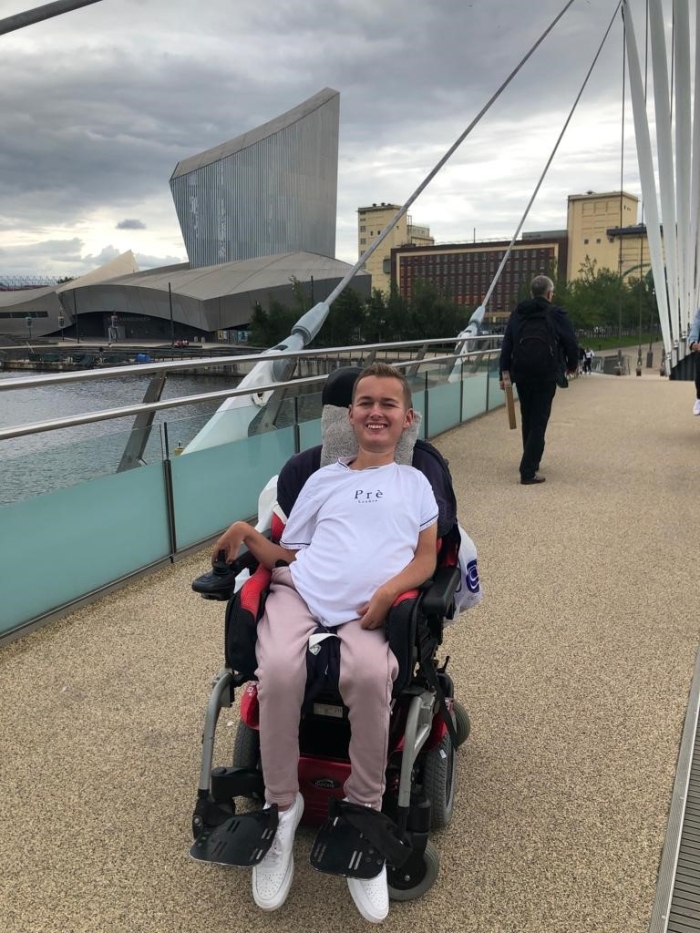 Over the years Sam has undergone treatment to support his respiratory system but has never been able to take any kind of medication treating the underlying cause of his SMA meaning his condition would just continue to deteriorate over time.

But now, thanks to a daily dose of Risdiplam, Sam believes he is already showing small signs of improvement.

He said: “I was watching a film with my mum one night and she suddenly said, ‘Did you feel that?’. I had squeezed her hand for the first time and she was quite emotional. I struggle to grip and clench things so this doesn’t sound much but to mum it was.

“When I found out I could have the new drug it was a great feeling and mum was pretty excited. We just hope the treatment will help maintain the strength I have now or I may even get a bit stronger.”

There are currently 15 patients at Salford Royal, which is part of the Northern Care Alliance NHS Foundation Trust, taking the new drug with this number set to double over the next 12 months.

Dr James Lilleker, Consultant Neurologist at Salford Royal, said: “The landscape has now completely changed for SMA patients with two drugs being available. The fact that Risdiplam is an oral medication is a game changer as we are unable to access the spine of many people with SMA to administer the alternative spinal treatment.

“To know that we now have these licensed medicines is very exciting and it fills us with hope for the future. We hope that by offering these treatments to our patients we can have a real positive impact on their life, delaying the progression of disability and helping them to live well for longer.”