On Friday, March 18, just over a year from building work starting, we were delighted to mark ‘Topping Out’. This means that the builders have completed the creation of the structure of the building.

They were privileged to be joined by former major trauma patient Josh McEntee who needed our care and on-going rehabilitation in 2016 following a serious car accident.

Josh said: “Nobody wants to find themselves in a major trauma hospital because it means you’ve had very serious injuries or you’re seriously ill. I spent months in hospital following a head-on car accident in which I suffered multiple, severe injuries to my brain, face and my legs. 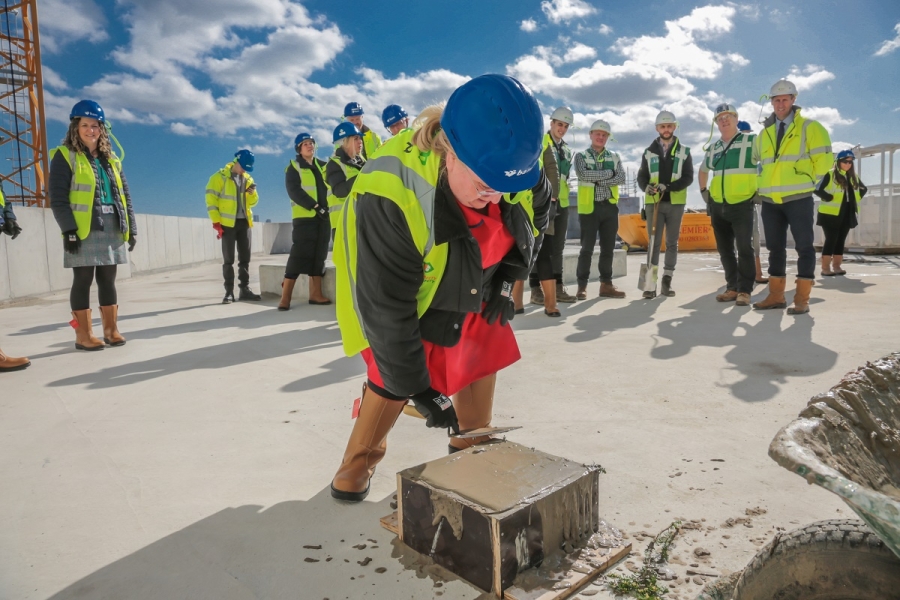 “I was left completely blind, which entirely changed my life. The care and support patients like me get when this happens to them is absolutely crucial. It literally makes the difference between whether their life can be saved or not and if it can be, the quality of their life that they can go on to lead. I am therefore absolutely thrilled that Greater Manchester is going to benefit from even better facilities for major trauma patients.”

Rob Bailey, Construction Director – North West, BAM Construction, said: “We’re so proud to be helping to bring this amazing new facility to the people of Greater Manchester. Despite the challenges of a pandemic, the construction programme has progressed really well and we’ve really enjoyed welcoming NCA colleagues on to the site to mark that the structure has now been built to its highest point.

“It was also great to meet Josh, a truly inspiring young man who helped to focus our minds even further on why the Greater Manchester Major Trauma Hospital is so important.”

Dr Chris Brookes, Chief Medical Officer for the Northern Care Alliance, which runs Salford Royal, said: “It has been extremely special to be able to share this construction milestone with Josh, as a former major trauma patient, and staff members who will be based within this wonderful new facility for the people of Greater Manchester.

“Josh is an incredible young man who is not letting the significant injuries he received stop him from leading an extraordinary life. I am so proud of my colleagues who have helped him and supported him in his recovery.

“It was also an honour to celebrate ‘Topping Out’ with Gabby, our Emergency Village Matron, who retires shortly but has been an amazing ambassador for our organisation and has been incredibly supportive in the long-running work to plan and design this new trauma hospital.”

For more on the scheme go to https://www.northerncarealliance.nhs.uk/about-us/new-hospital-developments/Greater-Manchester-Major-Trauma-Hospital

Back to Salford Care Organisation